From Whataburger restaurants in Texas… to Pizza Huts on the East Coast.

Fast food restaurants (QSR’s) are sold in a national market – not just locally. Even so, local property characteristics are just as important as they are for other types of properties. Nearby population density, income levels, visibility and traffic volume are all important. 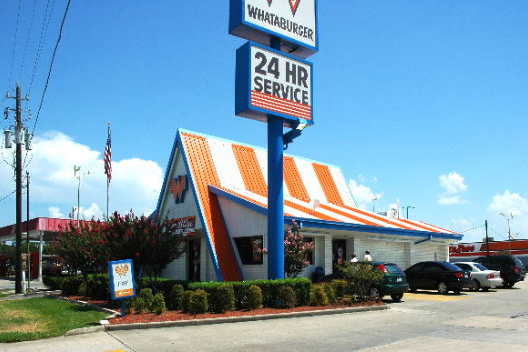 While nobody can predict the future, it has been our practice to provide a second valuation on every major franchise property we appraise. OSR’s have multiple values. For example, a Burger King restaurant can be viewed as a vacant restaurant, or as one that has a lease. The lease terms generally dictate the value However, if the franchise agreement or lease has expired, the building structure may or may not contribute value to the land – location tends to dictate. Generally speaking, in prime locations, the existing building is as likely to be razed as it is to be reused. In secondary locations the building may contribute meaningful value and in tertiary location minimal value.

We have seen QSR’s that had what were considered good locations for many years suddenly become undesirable…one example was a McDonalds located near the downtown area of a smallish town. Wal-Mart developed a superstore on the far side of an expressway serving the community. Within three years the Wal-Mart side of the expressway became the de facto center of commerce. The old McDonalds went vacant and a new one was constructed on an out-lot of the Wal-Mart.

We have also seen restaurants with leases generating enough to make the property worth well over $1,000,000.00 where if it was vacant and without the franchise, the value would be less than $50,000.00. We think it is important for investors and lenders to know these numbers.

Being appraisers of fast food restaurants on a national basis provides the Gorman Group with the information and expertise to handle these assignments.